So I got some new dice: 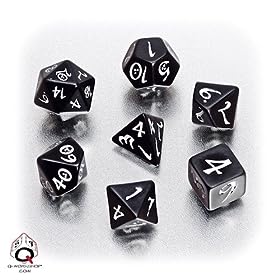 This is the Q-Workshop "Classic Elven" set. They also come in an inverted alternate opaque color scheme (white with black lettering) and a transparent one, but this one just happens to go well with a black leather dice bag I have.

I've wanted to pick up a set from Q-Workshop for some time, since I love the idea of somewhat "fantasy looking" dice, but readability was always an issue. Frankly, some of their stuff is ridiculously busy by my standards, and there's no way I'm going to sacrifice basic readability for anything.

These, in addition to costing less than half what their more gaudy sets do (due in no small part to using so much less packaging, I suspect), manage to look cool with no loss of functionality.

If you're looking for a well-made set of dice that are both affordable and eye-catching without being over the top (stone, metal, more convoluted than somebody's "tribal Celtic" tattoo), I'd highly recommend this one.
at 12:48 AM 2 comments:
Labels: dice, Q-Workshop

First off, hello to all the new readers! I can't believe I'm coming up on eighty now. Unexpected, but very welcome.

Anyway, as those of you who've read the older posts around here already know, I started gaming with the chance find of a badly-scuffed but fondly-remembered copy of Moldvay's Basic D&D rulebook that I chanced upon at a thrift store in 1990 when I was twelve years old (no box, though, so I missed out on the Keep, dice, and crayon).

My first point of contact with "the hobby" (as opposed to the few friends I played with in my small mountain hometown of Big Bear, CA) was when I began reading Dragon Magazine in 1991.

So why reiterate all this now? Because just the other day I pulled issue Dragon #175 (my first!) off the shelf for a nostalgic re-reading and I found myself paying more attention to the ads than to anything else. Specifically: The ads for play-by-mail games.

I've never actually played a PBM, and I suspect that their popularity was very much on the decline even back in 1991. Case in point: Personal computers and email were apparently becoming widespread enough that these very same Dragon issues also had ads for the earliest large online RPG games, like the original Neverwinter Nights.

Still, one ad for Flying Buffalo's Heroic Fantasy in particular brought back cool memories. A group of adventurers charging what looked to be a giant cat-bear monster erupting from a pile of skulls. One of the adventurers, amusingly, was a tiny topless (!) female pixie creature wielding a pencil-sized spear. The text promised "...a play-by-mail game of magic and mayhem; where you control a party of humans, elves, dwarves, fairies, leprecons, ogres, or even a troll or giant." Younger me was intrigued, but sadly also cash-strapped.

So I decided that I was going to Google Heroic Fantasy, just for the fun of it. Maybe I'd find some message board or blog posts from old players reminiscing about the game and I could get some idea of just what I'd missed.

Turns out Heroic Fantasy (now in it's 28th year) is still around! At least if Flying Buffalo's website is to be believed. I've finally got a chance to read the rules and the concept is one that's really tough for modern me to wrap my brain around. It's sort of like a multi-player computer game, except you don't own the computer. Instead, you mail the guy who does a listing of what characters you want to run and what you want them to do and then he plays the game and mails you back to tell you how it went. That's just...bizarre.

Bizarre, but still somehow intriguing. Like a time portal to a bygone era of gaming.

Long story short, I'm considering giving it a try. One turn a month. Hand written. Stuffed in a real paper envelope, affixed with real stamps, and dropped through an honest-to-goodness mail slot.

Will Mistretta
Will Mistretta is a old-school (A)D&D enthusiast from Washington. Born in 1978, he also enjoys video gaming, weird folklore, and zoology. His job is not worth mentioning. He has far too many wonderful pets.