A "quick and dirty" single class bard for AD&D 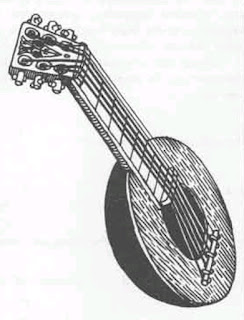 Like a lot of old schoolers, I dig the flavor of the AD&D 1st edition bard class and even a lot of its implementation, but balk somewhat at the convoluted pseudo-dual classing shenanigans and the usual lack of player interest in such a delayed satisfaction approach. Since I tend to be a minimalist when it comes to tweaking stuff, here's my stab at a single class version that sticks fairly close to the core concept of a druid/thief loremaster. Combat ability is scaled back to sub-fighter levels, but the combination of the cleric's weapon proficiency and better weapon and armor options than either the druid or thief still maintains some martial emphasis. Thief ability growth should be slow enough to not make dedicated thieves or assassins obsolete.

Stat/race/alignment requirements: No change from PHB.

Experience progression: No change from PHB Bards Table I.

Druid spells: No change from PHB Bards Table I. Apart from spell casting (including from scrolls) and knowledge of the secret druidic tongue, no other druid-specific class abilities are available to bards. Bards do not receive bonus spells for high wisdom.

Thief abilities: As 1st level thief at start, advancing at the rate of one thief level at every odd-numbered bard level thereafter.

Reconsidering AD&D psionics: An honest look at the pros and cons 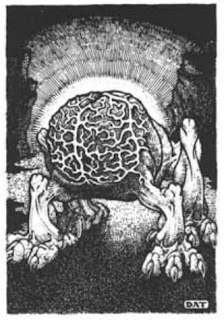 It's no secret that AD&D psionics have never exactly been popular. And I mean never. A vocal majority (?) of gamers have been deriding, ignoring, and generally neglecting them since day one. Before that, technically, since a version of them first appeared way back in Eldritch Wizardry. But I guess I'm feeling open-minded and generous lately, so I wanted to revisit them and give them the fairest shake I possibly can. Note that I won't be addressing the old saw about how "Science fiction stuff doesn't belong in a fantasy game!" On that score, I'll just refer you to old Appendix N. Anyway, here are my thoughts:

1. Functionality. Yes, really! Much to my surprise, the psionics rules given in the PHB and DMG are fairly straightforward and functional. They are, for all intents and purposes, a standard spell point magic system, albeit with more up-front random factors than are usually seen in the skill-based RPGs that tend to implement their magic type abilities this way. You have your various powers, a pool of points that fuel them, some guidelines for how fast spent points regenerate, and so forth. Psionic combat is oddly light on dice rolling for AD&D, and consists primarily of cross referencing various attack and defense types on a chart and applying the results. I'm genuinely surprised how workable the mechanical implementation actually is for those so inclined.

2. Feel. The details of AD&D psionics may not be too crazy in a wider RPG context, but they're weird as hell for AD&D. Whatever else the psionics practitioner might be, they're not just another core class using a cosmetically reskinned version of the base magic rules. They're...Something Else...Something Strange. That's honestly quite cool if you ask me. Beyond that, they're just such a full-flavor AD&Dism, tied to iconic monsters like the Mind Flayer and Githyanki/Githzerai. There's a mindset that says, "If you're gonna do something, do it with no all gusto and no apologies." That's AD&D with psionics, alright.

1. Situationality. By the book, psionics are rare. Really rare. A complete beast of a hypothetical PC with 18s in intelligence, wisdom, and charisma maxes out at a one-time 10% chance to possess psionics at character creation. 3% - 5% is far more realistic. As a DM, the prospect of learning an entire elaborate sub-system that might (might!) be available to 5% of characters can obviously smack of wasted effort.

2. Character balancing. Equally common and obvious are concerns about psionic characters potentially unbalancing the game. Thankfully, I do think they're overstated. Yes, psionics are "free" for the characters lucky enough to qualify for them. As anyone who's seen the film Scanners knows, however, mental combat between psionics is horrifically deadly. Furthermore, the DMG specifies an increased chance for random psionic monster encounters whenever psionic powers are employed by the party. A true risk/reward dynamic is thus present. Psionics make their wielders stronger than their mundane counterparts in some respects and more vulnerable in others, and players who know the odds may well prefer to go without.

3. The Decker Problem. Psionic combat really is its own thing. When two psychic figures are going mind-to-mind, they each take their actions on a per segment basis. In other words, ten individual exchanges per round! The remainder of the game basically pauses while they hash it out, and the rest of the table...well, they can cheer their buddy on, maybe?

The decision of whether or not to include old school psionics ultimately comes down to whether the individual DM feels that the sheer weird, wild tone of PCs lashing their Ego Whips against an intellect devourer's Thought Shield is worth learning an entire new "magic" system that probably won't see use often, but has the very real potential to hog the spotlight whenever it does come to the fore in combat. Personally, I'm leaning toward doing it in my next game, just for the freaky flavor of it and to actually get some solid use out of all those wacky monsters for a change. 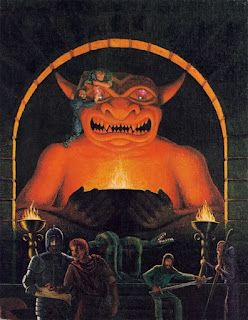 The enduringly popular 1981 edition of D&D, often called B/X or Moldvay D&D, was my introduction to tabletop RPGs. That should come as no surprise, given the name I chose for this very blog back in the day. It's also the version I've played and enjoyed most recently, running a B1 In Search of the Unknown one-shot at the 42nd Dragonflight gaming convention last month. Its approachability, polish, and overall brilliance have stood the test of time. I truly adore it.

It's not home, though. Not really. Shortly after 12 year-old me discovered that little red book in a secondhand store circa 1990, I fell in with a local group of established (and tolerant) adult gamers, and they swore by none other than Gary Gygax's own Advanced Dungeons & Dragons. Here, I'm talking the original (dare I say "real?") version, not the then-current AD&D 2nd Edition.

If B/X fired my young imagination, getting my hands on the AD&D books fanned it into a dizzying phantasmagoric inferno. These weighty tomes with their baroque prose and ominous illustrations felt like a world unto themselves; brooding, mysterious, and, in hindsight, metal as hell. Ironic, since I suspect Gygax's own musical tastes were anything but. To a middle schooler, these texts were dense and challenging, almost to the point of hostility, yet the darkly glamorous vistas of fantasy they promised shimmered mirage-like at edges of my understanding, making them paradoxically impossible to put down. It was a profoundly meaningful, once-in-a-lifetime reaction to an RPG system. To put it simply, these are magic books in my eyes.

It wasn't long after this that I became an avid reader of Dragon magazine, which was primarily an AD&D-focused publication at that time. That meant 2nd Edition, of course, but the concepts and terminology employed in most articles was relatable enough. In the pre-Internet era, Dragon was my primary connection to the hobby at large, and this further cemented various AD&D-isms like percentile strength and the nine-point alignment system as the default in my mind.

So what I'm really getting at here, I suppose, is that I've come to accept that I am, at heart, an AD&Der. Then, now, and forever. It's my conceptual norm, my platinum standard, my Real Deal Holyfield of fantasy RPGs. I've played, and harbor no small amount of affection for, all the game's TSR-era iterations. Even 2E is entitled to some love from me. I've also had great luck with the various latter day retro-clone versions of the same, such as Labyrinth Lord, Swords & Wizardry, and, of course, OSRIC. Authentic late '70s/early '80s AD&D still sits at the apex of the pyramid for me, however. Is it flawless? Lord, no! I'm just at a point where those perceived imperfections (the absurd pummeling/grappling rules, for example) don't really grate on me the way they used to. If I don't like a sub-system, I don't need to use it. Any DM remotely worthy of the title knows that. Mine is a hard-earned "warts and all" love, not a naive denial of reality. On the flipside, playing these various simplified or pared-down versions of the game, I always find myself hankering for some AD&D rule or other. Better to have it and not want it than want it and not have it.

AD&D isn't perfect and it isn't for everyone. What it is is the only game that's ever filled me with the wide-eyed awe and shuddering dread of flipping through the demon section of the Monster Manual, picturing the horrors that awaited intruders in the noisome lair of the Demon Price Juiblex. That's irreplacable and that's why it's home.