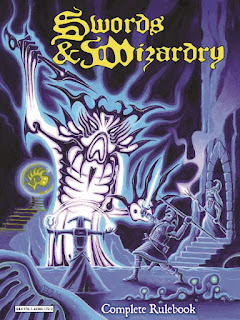 Since my earlier deep dive into Advanced Labrynth Lord was generally well received by the community, here are the substantial errors I've noted in another of my favorite rulebooks, Swords & Wizardry Complete. As before, I've left out trivial typos (misspellings, misplaced commas, etc.) in favor of things that might actually cause confusion or unintended results during play. Please also note that in many cases, it can be difficult (if not impossible) to determine if a deviation from the original material is an error or intentional. Any known intentional deviations by the author were omitted. This document is no way officially endorsed by the creator of Swords & Wizardry. Nevertheless, I hope you find it useful.

This is a work in progress and will be periodically updated.

Page 19, Harmonic Touch: Blackmoor limited this potent monk ability to one usage per week. There is no mention of any sort of usage restriction in S&WC.

Page 35, Different Categories of Saving Throws: It is not noted that monsters generally save as fighters of a level equal to their HD when using this method.

Page 45, Trouble Develops: The combat example describes two characters with movement rates of 6 as being able to move 60' in a single round. 20' would be the correct figure per the chart on page 32.

Page 52, Aerial Servant: The attack bonus of +17 given for this monster should be +15 based on the guidelines given on the "Monster Attack Tables" (page 40). The creature's movement rate is also given as 240' as opposed to 24.

Page 55: Continual Light: The main writeup indicates that this is a second level magic-user spell, but does not mention that it is also a third level cleric spell. Further, the distinction between the magic-user and cleric versions of the spell (the light shed by the former is not equal in intensity to sunlight while the latter's is) is not made clear. Finally, it is not stated that this spell may be reversed by evil clerics.

Page 56, Detect Evil: It is not specified that this spell may be reversed by evil clerics.

Page 57, Dimension Door: A duration of one hour is specified. It should be noted as instantaneous instead.

Page 57, Dispel Evil: It is not specified that this spell may be reversed by evil clerics.

Page 57, Hallucinatory Forest: It is not stated that this spell has a reversed version used to dispel its effects.

Page 61, Light: It is not specified that this spell may be reversed by evil clerics.

Page 65, Permanency: This spell's effect requires a dispel magic of twice the caster's level to remove it. Is not clarified, however, that multiple magic-users may dispel in concert in order to combine their levels toward meeting this threshold, similar to phase door. Otherwise, a minimum 32nd level magic-user would be required to dispel almost any permanency!

Page 72, Transmute Rock to Mud: It is not stated that this spell has a reversed version used to dispel its effects.

Page 79, Summary of Important Dungeon Facts: The need for PCs to spend one turn per hour of exploration resting (and two turns following a battle or pursuit) is not mentioned.

Page 83: Getting Lost: The text implies that the check to get lost is made once daily (" The party may check the next day and discover that they were lost..."), but this is never unambiguously stated.

Page 83: Encounters in the Wilderness: There are no guidelines presented for encounter check frequency in the wilderness. Page 17 of The Underworld & Wilderness Adventures suggests one check daily with anywhere between a 1 in 6 and 3 in 6 chance of an encounter, depending on the terrain type.

Page 99, Dragons: This entry states, "Dragons have double normal treasure (that is, a gold piece value of four times the dragon's XP value)." Since the standard value of a treasure hoard is determined by rolling 1d3+1 x monster XP, however, it's unclear whether dragons are intended to always have a fixed x4 multiplier or if whatever is rolled is really meant to be doubled, potentially as high as XP x 8.

Page 104, Grey Ooze: This entry states "Metal (but not stone or wood) must make a saving throw vs. acid when exposed to grey ooze" and "When the grey ooze hits a character in metal armor, the armor must make an item saving throw." Item saving throws are not mentioned anywhere else in S&WC.

Page 120, Generating a Random Treasure Hoard: The option for the GM to add platinum coinage to the game is presented, but the "TSR standard" value of 5 GP per PP isn't stated.

Page 121, Scrolls: It's not stated anywhere in S&WC that casting a spell from a scroll (or copying it to a magic-user's spell book) causes the writing on the scroll to disappear.

Page 127, Staff of Power: The fireballs and lightning bolts cast from the staff deal only 4d6 damage. This is a mere half of what OD&D calls for, and thus may be an error.

Page 129, Lenses of Charming: The name of this item is not shown in bold text, making it easy to miss.

Page 130, Mirror of Mental Scrying: The name of this item is not shown in bold text, making it easy to miss.